home Go back to home

Where to Find Us

Luke, Tony, Zachary, and I (Nicole) attended the second annual Spring Bloom Festival and had the opportunity to taste food and drink at all of the booths at the new International Food Festival. Having met with Chef Paul and tasted some of his dishes ahead of time, we were very excited to try the entire internationally inspired, farm-to-table menu.

The Festival has been extended through Mother’s Day, so there still is plenty of time for everyone to try all of the locally-sourced foods and beverages. Last weekend Bistro 75 started serving the International Food Festival dishes in lieu of their normal menu. Sitting on the lovely patio on Sunday next to the fountains made the experience even better. It probably also allowed Chef Paul and his staff to focus more on the festival food, likely making the entire event run more smoothly.

The four of us sampled all of the offerings at each of the six themed “houses.” I think everyone appreciated that the event was contained within International Street, allowing us to find a seat and relax, while we tasted everything.. I also think the smaller menu improved the overall quality and consistency of the dishes at this inaugural event.

Before you dive into the review, if you’d like to familiarize yourself with the event’s offerings, you can check out a complete description of each of the items available in one of our earlier posts, here. 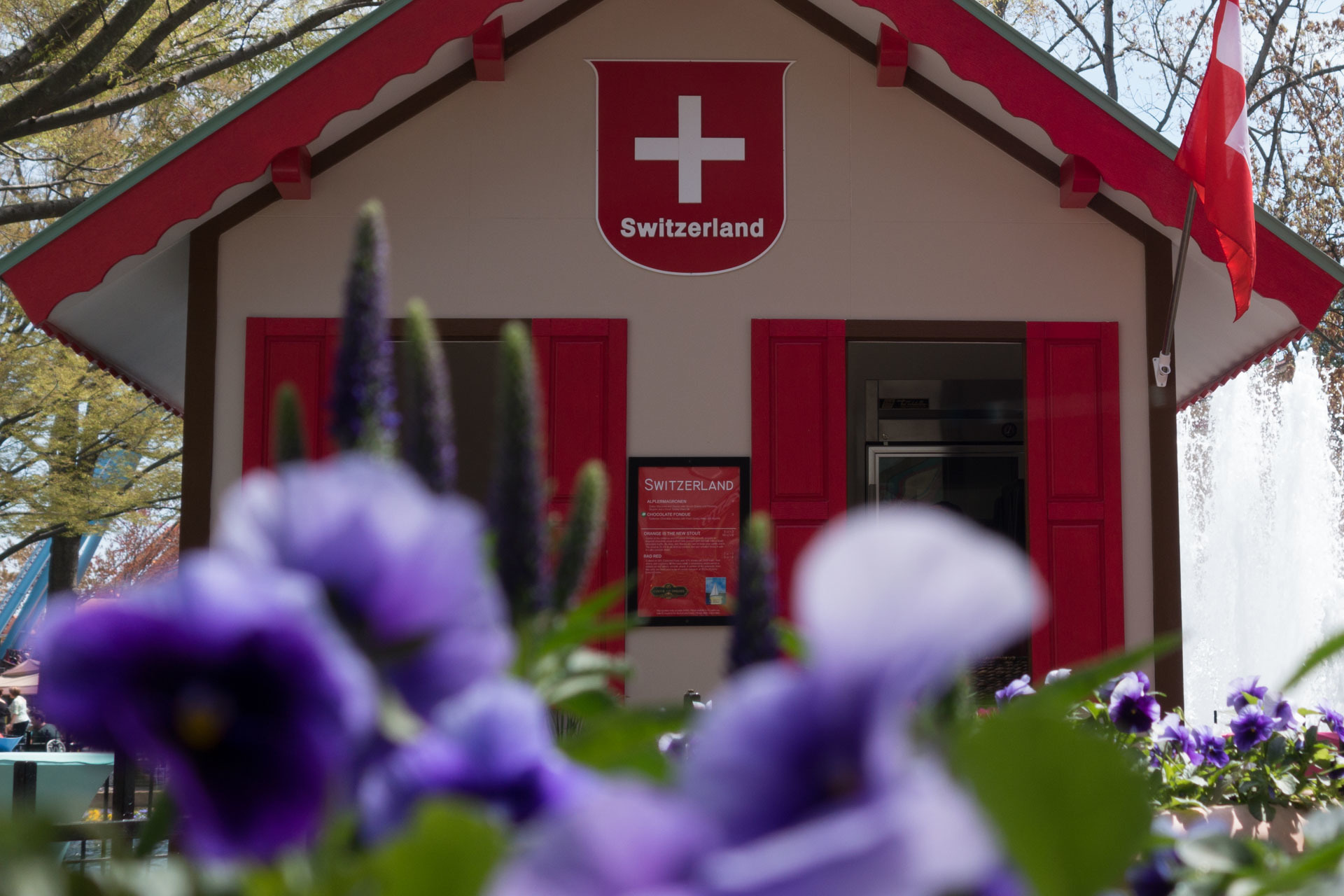 Kings Dominion built themed “houses” for three of the event’s booths, including Germany. This venue paired with the excellent menu made this one of the best locations at the event. The bratwurst on a pretzel bun was Tony’s favorite savory dish. In fact all of us enjoyed the wonderful spices in the sausage, the flavorful bun, the touch of mustard, and the pickled onions. The bread pudding, which was soft and yummy and tasted like boozy French toast, ranked as Tony’s favorite dessert. Once again everyone in our party liked this sweet, although I would have preferred slightly more exotic flavors.

Entire Selection of Items at the Germany House

The Hawaii booth had a cool and light tuna dish, which would be excellent addition to the in-park menus in the Summer. Both Zachary and I loved the creamy coconut custard. It had intense coconut flavor that was paired perfectly with the mango and donut. We liked it so much that we have bought this island dessert on each trip to KD, since our initial tasting.

We all loved the bruschetta; in fact, it was Luke and my favorite dish. The goat cheese flavor was well balanced with the rest of the ingredients, especially the blood orange balsamic vinaigrette. Tony, however, thought the bread seemed a bit stale and his serving could have used a little more cheese. The pesto orzo was also well received by the group, complementing the dish. The limoncello mousse, Luke’s favorite dessert, was light and fluffy, and the candied lemon peel was a perfect topper. We did notice, however, some inconsistencies among our servings: two of them tasted different than the others.

Full selection of items available from the Italy house

Kings Dominion served the Jamaican and the Hawaiian foods together at the same booth. We tasted the jerk chicken and consensus was that it needed more spice. The rice, papaya chutney, and micro cilantro were good, however.

The jerk chicken alongside the booth’s drink offerings

There were two dishes at this house: mac & cheese and chocolate fondue. We all enjoyed the creamy and “bacony” mac & cheese. It is a definite must for those who are “food shy.” As for the fondue, the biscotti was a bit hard but had fantastic flavor; the banana was good; the strawberries did not seem ripe; and the chocolate sauce, itself, was extremely thin.

The full selection of items available at the Swiss house

Rather than building a house, the Vietnam’s offerings were served at KD’s new food truck. The Kimchi, when added to the sandwich, brought out flavors of the beef. It was Zachary’s favorite savory dish, although I thought the vegetables overpowered the sandwich.

The Tastes of the Tower food truck

We also sampled all of the beer, wine, and non-alcoholic beverages. Everyone loved the Jamaican Ginger Beer. In fact Zachary and Tony would like to see KD add this light and citrusy drink to their regular menus. Luke really enjoyed James River Cellars fruity, white Chardonel, and we all appreciated that it comes from a local winery. My favorite drink was the Big Wave beer. It was light and refreshing, and I think it would make a great addition to Soak City. 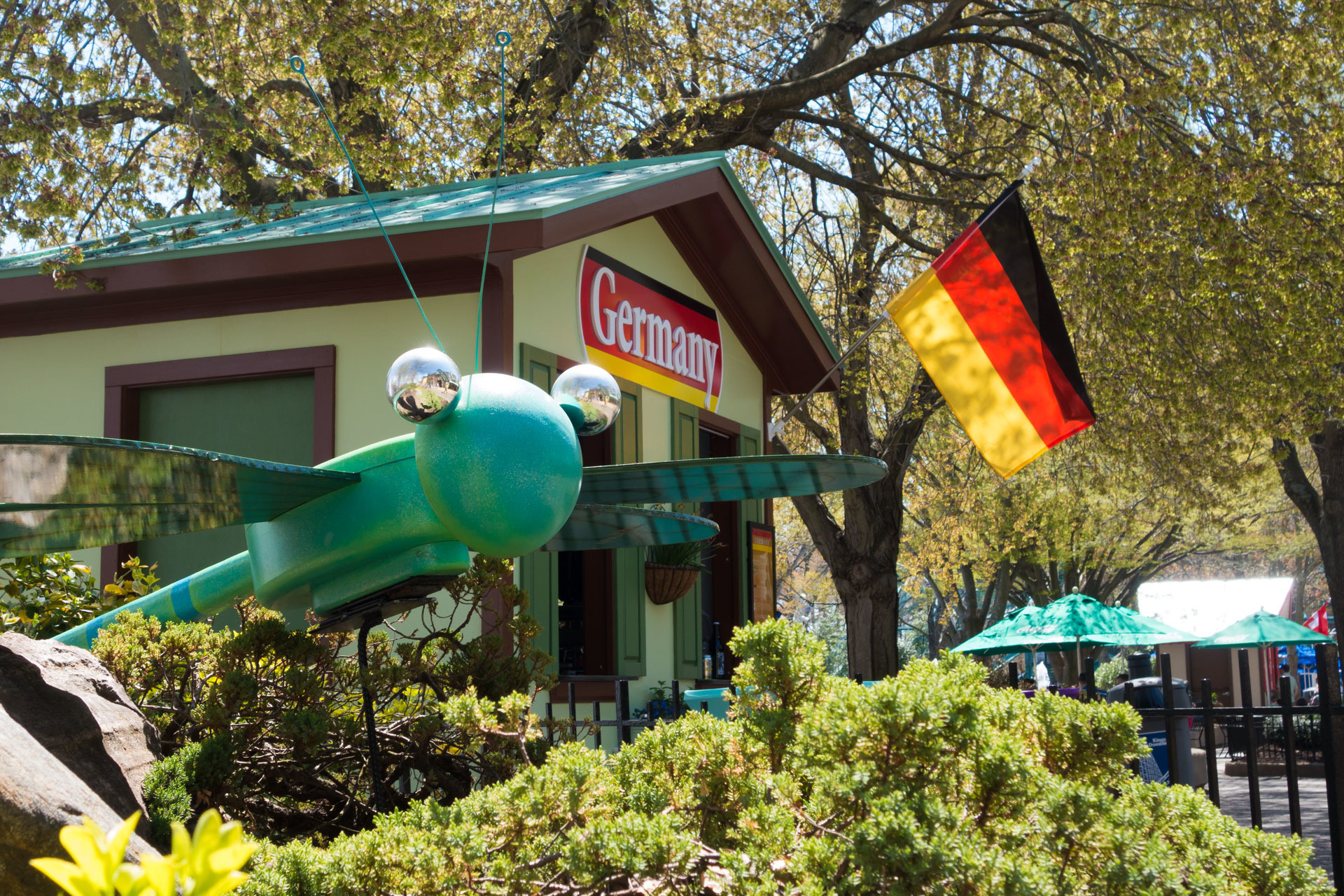 While we loved most of the food and encourage everyone to try something on the menu, there were some issues with the event, itself. Credit cards were not accepted at any of the houses. While the inclusion of the festival foods at the Bistro mitigated this problem, hopefully by next year the park will have found a way to take electronic payments throughout the event. In addition, the staff are clearly inexperienced.

They were often slow and weren’t always familiar with their menu items. Chef Paul mentioned that he has started training a dedicated team this year, so hopefully that problem will solve itself over time. Most concerning, however, was the lack of consistency in some of the dishes. Hopefully, as the event matures that issue will similarly work itself out. My hope is that all of these concerns will be addressed next year: hiccups are inevitable the first time out.

Overall we thought Chef Paul’s food was fantastic and the event was a lot of fun. There was a wide, but not overwhelming variety of flavors, and the smaller menu probably ensured better quality control. We also love that Chef Paul sourced much of the event locally. The houses were well-themed and location was lovely. We look forward to seeing how the Spring Bloom’s International Food Festival grows and matures next year.