home Go back to home

Where to Find Us

On April 16th, Zachary, Luke, Tony, and I visited Kings Dominion to check out the Spring Bloom Festival. As in the past, the park has adorned International Street with whimsical, garden-inspired decorations. Last year KD added an International Food Faire to the flowers and concert series, and as has become our custom, we decided to sample everything.

Spring Bloom Italian Booth
Before I get to the food, itself, I want to commend the park on some great changes they made to this year’s event:

In addition to the improved logistics, the International Food faire also boasts better tasting dishes this year.  Among the four booths there were very few items that we all disliked, and several we unanimously loved.

Two of our overall favorite dishes are available at the German booth. 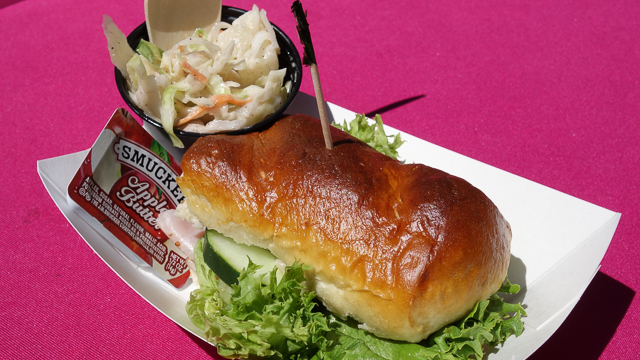 This sandwich was my favorite item at the event. The combination of the cucumber, apple butter, and apple slaw added a sweet and tangy crunch to the traditional ham and cheese with mustard. The result was light and fresh with a perfect balance of tastes and textures. 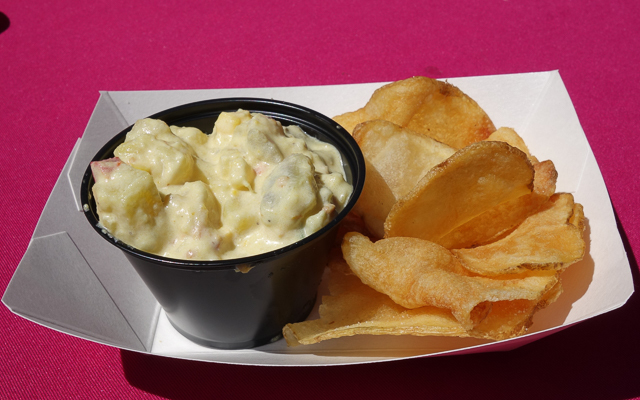 This side item was Zachary’s favorite dish; he says it is the best potato salad he has ever eaten. Once again Chef Paul found the perfect balance of flavors: the “sauce” had just enough tang, and the eggs did not overwhelm the potatoes. The crunchy kettle chips provided an interesting counterpoint to the creamy salad. 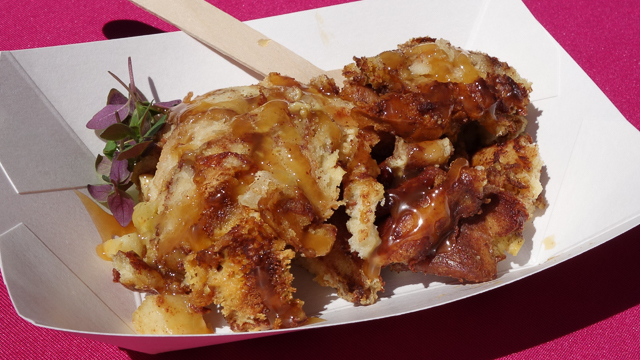 We all enjoyed this dessert, but thought it probably needed slightly more apple and pilsner caramel sauce. 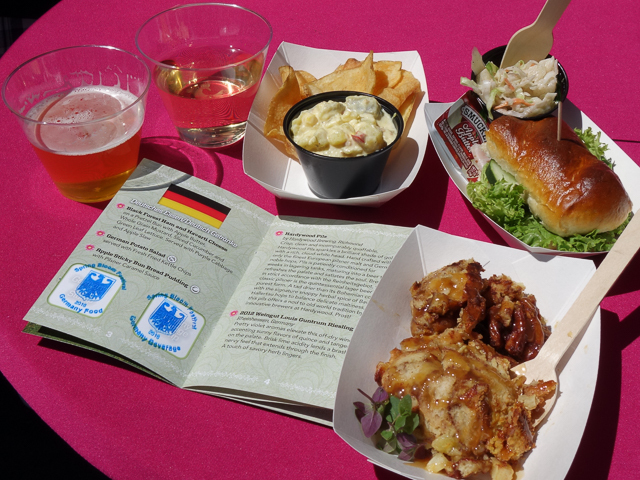 Neither of the beverages stood out, but depending on your tastes, either is probably a safe option. The wine tasted like most Rieslings, and the beer seemed like an average pilsner. I would personally have preferred a slightly less sweet wine, and a little more malty flavor in my beer.

This booth offered traditional favorites with a unique twist, which seems to be Chef Paul’s specialty. 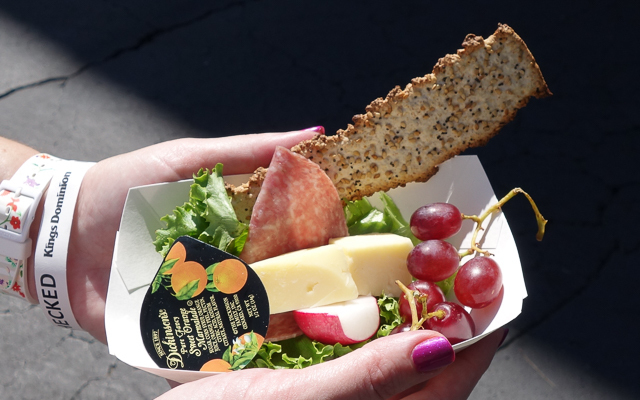 Who doesn’t like a charcuterie plate? The components all worked well together. The meats and cheeses were mild, but the crostini brought a fantastic crunch and injection of flavor. The orange marmalade also paired extremely well with the cheese. 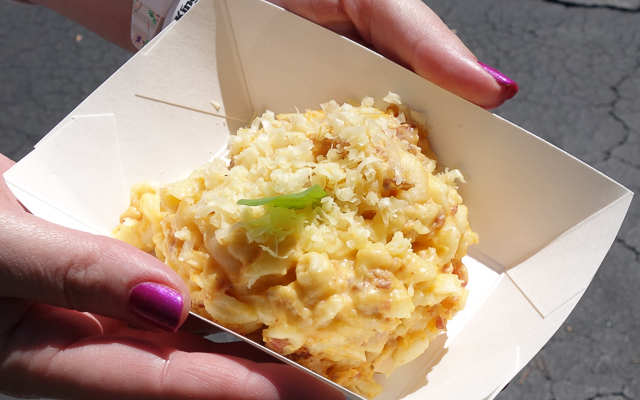 Obviously, this is another easy crowd pleaser. We were surprised, however, by Chef Paul’s version. The diced bacon did not make the dish too salty, and the shredded cheese on top added texture and flavor. Even the macaroni was well cooked. It all came together to be Tony’s favorite dish at the event. 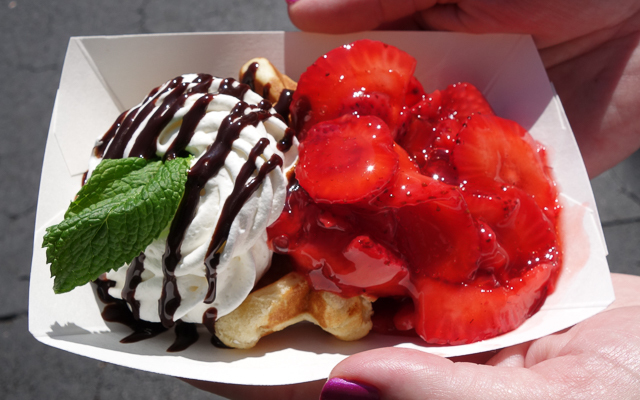 Sadly, this dessert, which has so much potential, was a bit of a letdown. While we did enjoy the glazed strawberries and chocolate, the waffle itself was tough and needed more vanilla. 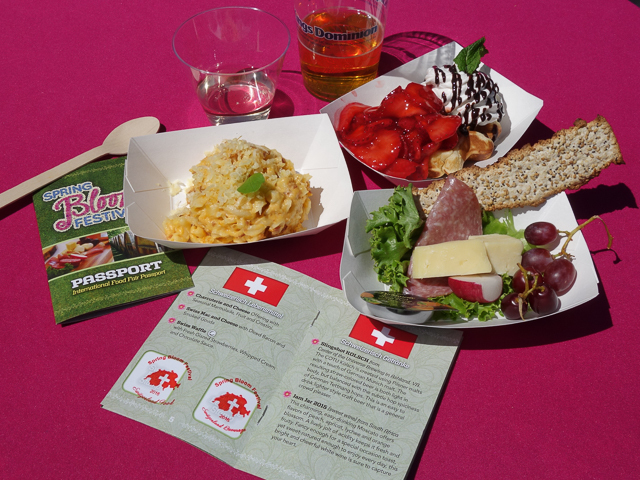 I, personally, enjoyed the beer more than the wine at this kiosk, although neither was fantastic. I don’t really like sweet wines, so this South African Moscato was simply not to my taste. The Kolsch, however, was in my opinion better than the German pilsner, as it had nice “hoppiness” and more malt. 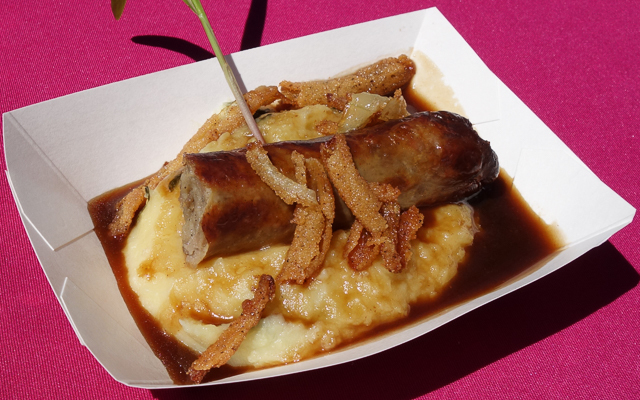 Luke’s favorite dish was creamy and flavorful. The sausage had great herbs and the gravy enhanced the potatoes perfectly. We all would recommend trying this classic. 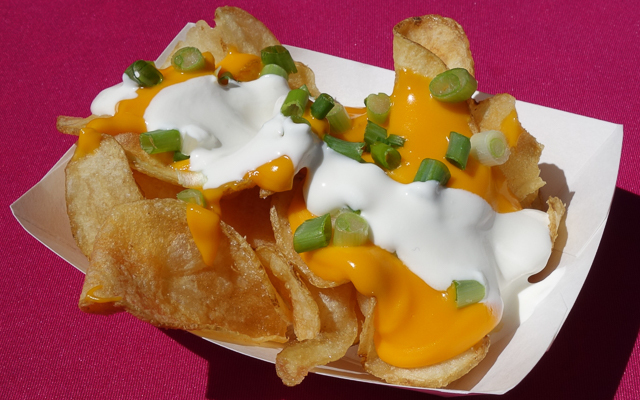 While I appreciate the concept, most of us thought the execution fell short of our expectations. Maybe it is because I adore potato skins, but I really thought the dish needed some kind of meat, probably bacon. Since I understand the need for vegetarian options, I probably would have overlooked that exclusion, if the cheese tasted better. Unfortunately, it seemed fake and “plastic,” for lack of a better word. We did enjoy the cool sour cream and fresh chips. 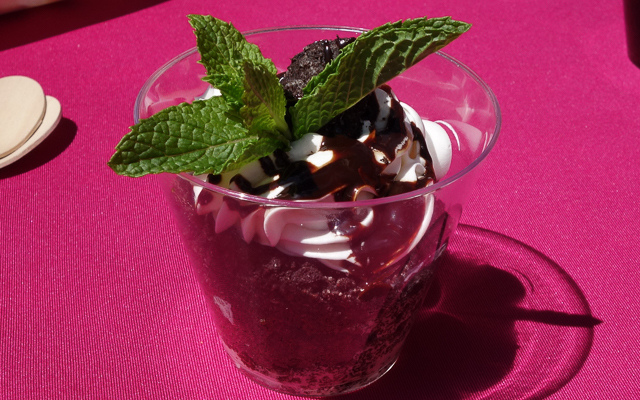 Everyone enjoyed this mixture of cake, cookies, and cream. Perhaps it could have had more coffee flavoring, but it was wonderfully chocolatey and creamy. 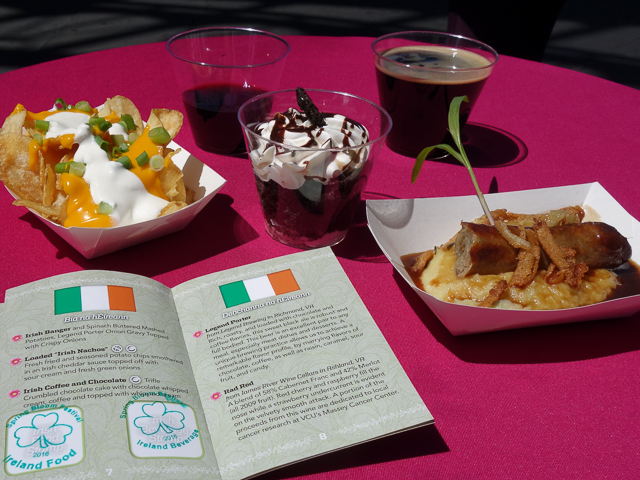 We all liked these local beverages. The red blend was smooth and fruity without being too sweet; and the porter had a rich, chocolatey taste.

The Italian booth boasts the event’s most adventurous cuisine. 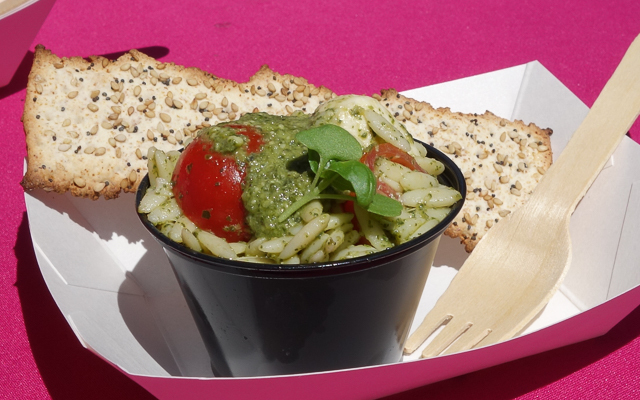 We have always loved Chef Paul’s pesto, and this version was no exception. The orzo and pesto were predictably great, and the crostini added an appealing sesame and garlic crunch to the mix. While we liked the Bocconcini, they didn’t seem to add either flavor or texture. 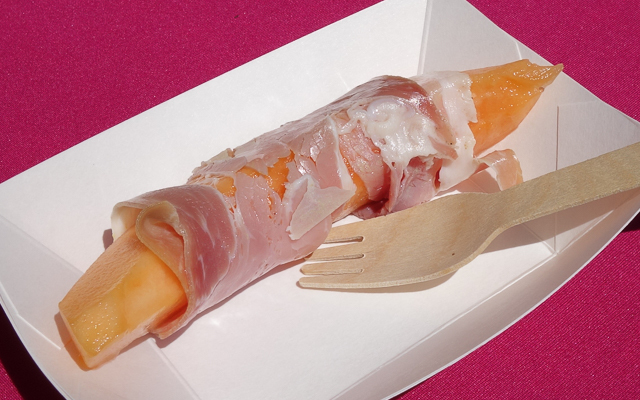 I will admit that I was worried about this offering. Very often, when I am served fruit wrapped in meat, the result is a rancid flavor and a slimy consistency. I was very pleasantly surprised by Chef Paul’s sweet and salty dish. The melon was ripe and the prosciutto wasn’t too strong, resulting in a perfect spring pairing. 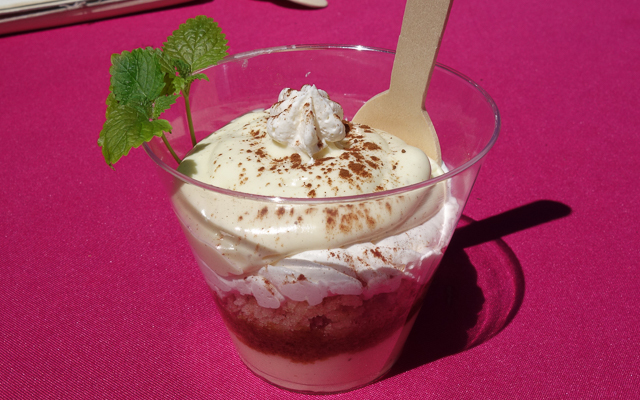 Although I would have preferred stronger flavors in this dessert, it was everyone’s favorite at the event. The custard was creamy, and it was light and not cloyingly sweet. 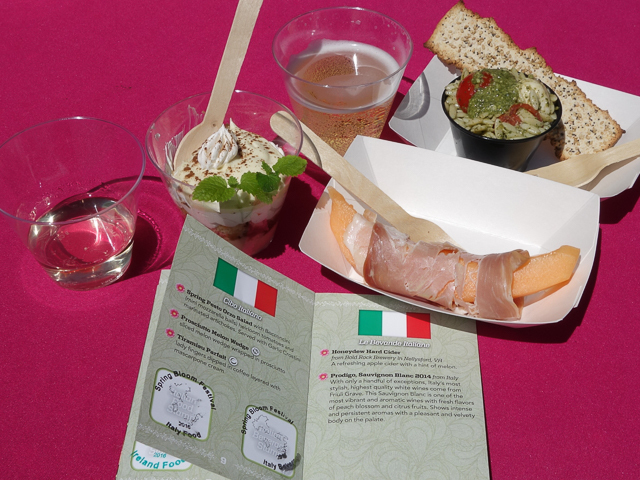 While we disagreed about the Sauvignon Blanc, we all though the cider was the best beverage at the event. It is worth noting that we all love hard cider, but the hint of melon made an excellent drink even better. The wine was a great choice for a spring festival, and Zachary in particular enjoyed it; but some of us thought this white was sour, rather than fresh and fruity.

Overall we loved the International Food Faire. The dishes were great; the new layout was charming; and the ticketing system was convenient. Chef Paul once again proved that he is the master of taking foods people are familiar with and serving them in new and interesting ways. Everything was fresh and the presentation was lovely.  The 2016 Spring Bloom Festival was a great way to start the 2016 season at Kings Dominion.